The species is usually found in eucalyptus woodlands, or along water courses. In the more northerly parts of the country, these cockatoos are commonly seen in large flocks. They are seed eaters and cavity nesters, and as such depend on trees with fairly large diameters, generally Eucalyptus. Populations in southeastern Australia are threatened by deforestation and other habitat alterations. Of the black cockatoos, the red-tailed is the most adaptable to aviculture,[2] although black cockatoos are much rarer and much more expensive in aviculture outside Australia.[3] 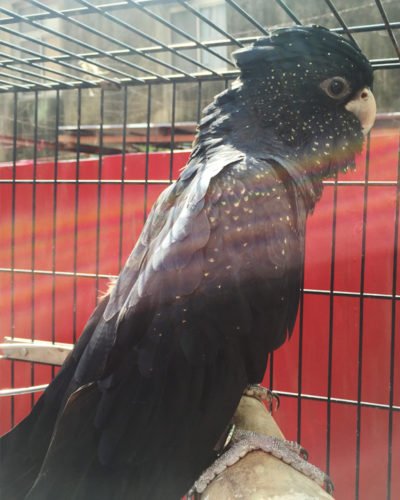 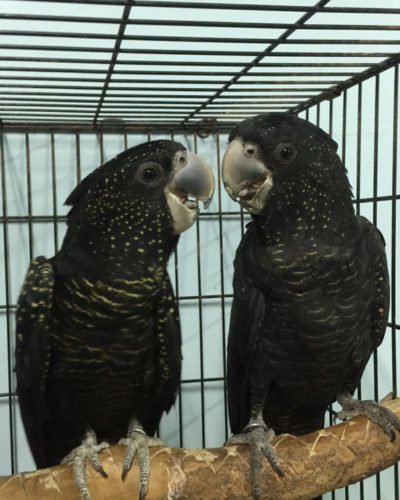 Red-tailed black cockatoos are around 60 centimetres (24 in) in length and sexually dimorphic. The male’s plumage is all black with a prominent black crest made up of elongated feathers from the forehead and crown. The bill is dark grey. The tail is also black with two lateral bright red panels. Females are black with yellow-orange stripes in the tail and chest, and yellow grading to red spots on the cheeks and wings. The bill is pale and horn-coloured. The underparts are barred with fine yellow over a black base. Male birds weigh between 670 and 920 grams (1.5–2 lb), while females weigh slightly less at 615–870 grams (1.25–1.75 lb).[25] In common with other cockatoos and parrots, red-tailed black cockatoos have zygodactyl feet, two toes facing forward and two backward, that allow them to grasp objects with one foot while standing on the other, for feeding and manipulation. Black cockatoos are almost exclusively left-footed (along with nearly all other cockatoos and most parrots).[40]

Juvenile red-tailed black cockatoos resemble females until puberty, which occurs around four years of age, but have paler yellow barred underparts.[25] As the birds reach maturity, males gradually replace their yellow tail feathers with red ones; the complete process takes around four years.[41]

As with other cockatoos, the red-tailed black cockatoo can be very long-lived in captivity; in 1938, ornithologist Neville Cayley reported one over fifty years old at Taronga Zoo.[42] Another bird residing at London and Rotterdam Zoos was 45 years and 5 months of age when it died in 1979.[43]

Several calls of red-tailed black cockatoos have been recorded. The bird’s contact call is a rolling metallic krur-rr or kree, which may carry long distances and is always given while flying;[44] its alarm call is sharp.[44] Displaying males vocalize a sequence of soft growling followed by a repetitive kred-kred-kred-kred.[21]

The red-tailed black cockatoo principally occurs across the drier parts of Australia. It is widespread and abundant in a broad band across the northern half of the country, where it has been considered an agricultural pest,[45] with more isolated distribution in the south. It is found in a wide variety of habitats, from shrublands and grasslands through eucalypt, sheoak and Acacia woodlands, to dense tropical rainforests.[5] The bird is dependent on large, old eucalypts for nesting hollows, although the specific gums used vary in different parts of the country.

Cockatoos are not wholly migratory, but they do exhibit regular seasonal movements in different parts of Australia. In the northern parts of the Northern Territory, they largely leave areas of high humidity in the summer wet season.[46] In other parts of the country cockatoo seasonal movements tend to follow food sources, a pattern recorded in Northern Queensland,[47][48] and New South Wales. In southwest Western Australia, both extant subspecies appear to have a north–south pattern; northwards after breeding in the case of subspecies naso,[49] while movements by subspecies samueli in the wheatbelt can be irregular and unrelated to the seasons.[50]

The species complex was first described by the ornithologist John Latham in 1790 as Psittacus banksii,[4] commemorating English botanist Sir Joseph Banks. The red-tailed black cockatoo also has the distinction of being the first bird from Eastern Australia illustrated by a European, as a female, presumably collected at Endeavour River in north Queensland, was sketched by Banks’ draughtsman Sydney Parkinson in 1770.[5] Narrowly predating Latham, English naturalist George Shaw described Psittacus magnificus from a specimen collected somewhere in the Port Jackson (now Sydney) region.[6] For many years, the species was referred to as Calyptorhynchus magnificus,[7] proposed by Gregory Mathews in 1927 as Shaw’s name had predated Latham’s 1790 description. For several decades, Mathews’ proposal was accepted by many authorities, although it was unclear whether the original Port Jackson reference had actually referred to the red-tailed black or, more likely, the glossy black cockatoo. In 1994, an application to conserve Calyptorhynchus banksii as the scientific name was accepted by the ICZN.[8] The red-tailed black cockatoo is the type species of the genus Calyptorhynchus,[9] the name of which is derived from the Greek calypto-/?a??pt?- “hidden” and rhynchus/?????? “beak”.[10] The change was first made by Anselme Gaëtan Desmarest in 1826.[11]

In 1827, Jennings proposed the name Psittacus niger for the bird.[12] The binomial combination had already been used by Carl Linnaeus for the lesser vasa parrot in 1758,[13] and by Johann Friedrich Gmelin for the palm cockatoo in 1788; it was thus invalid even though both other species were already known by different names at the time. Alternate common names include Banks’ black cockatoo, Banksian black cockatoo, or simply black cockatoo.[14] Indigenous people of the central Cape York Peninsula have several names for the bird: (minha) pachang in Pakanh; (inh -) inhulg in Uw Oykangand; and (inh -) anhulg in Uw Olkola. (The bracketed prefix (inh- or minha) is a qualifier meaning ‘meat’ or ‘animal’.)[15] Ngarnarrh or karnamarr are terms used by the Kunwinjku of Arnhem Land.[16][17] In Central Australia, southwest of Alice Springs, the Pitjantjatjara term for the subspecies C. b. samueli is iranti.[18] Karrak is a Noongar term derived from the call for the southwestern race C. b. naso.[19] In the language of the Bungandidj of south-eastern South Australia and western Victoria this bird was called treen.[20]

The red-tailed black cockatoo’s closest relative is the glossy black cockatoo; the two species form the subgenus Calyptorhynchus within the genus of the same name.[14] They are distinguished from the other black cockatoos of the subgenus Zanda by their significant sexual dimorphism and calls of the juveniles; one a squeaking begging call, the other a vocalization when swallowing food.[14][21]

A 1999 mtDNA phylogenetic study of cockatoos utilizing among others, the red-tailed black cockatoo supported the hypotheses that cockatoos originated in Australia before the Paleogene and Neogene periods (66 mya, marking the end of the Mesozoic, to 2.6 mya) and that the genus Cacatua diversified in two separate radiations to the islands of Indonesia, New Guinea, and the South Pacific. It concluded that the first extant cockatoo to diverge from the ancestral cockatoos was the palm cockatoo, followed by a subclade containing the black cockatoos.[22]

A 2008 mitochondrial and nuclear DNA phylogenetic study of the parrots, cockatoos and related taxa by utilizing among others the yellow-tailed black cockatoo, provides confirmatory evidence for a Gondwanaland origin of the ancestral parrots in the Cretaceous period, and an Australasia divergence of the ancestral cockatoos from the parrots in either late Cretaceous (66 mya) or Paleogene (45 mya) periods depending on baseline assumptions.[23]

Five subspecies are recognised; they differ mainly in the size and shape of the beak, the overall bird size and female colouration:[24]